Ryan Murphy’s television empire is expanding further with Pose, premiering on FX on June 3. Set within the ball scene in ’80s New York, Pose stars a record-breaking five trans actors in lead roles, per The Hollywood Reporter, including Mj Rodriguez, Dominique Jackson, and Indya Moore. The series is based on a real subculture, but are these actors playing real people? Moore’s Pose character Angel isn’t based on a real person, but the show’s creator aimed to make the new show as authentic as possible.

According Emily Nussbaum’s recent New Yorker profile of Ryan Murphy, the series creator originally wanted to make a show based on subjects of Paris Is Burning, the 1990 ball documentary from filmmaker Jennie Livingston. But as luck would have it, he met a screenwriter named Steve Canals, who had already written a promising script called Pose. And although Canals’s characters were fictional, they were set in the same world Murphy was already envisioning.

However, after Murphy picked up the script, Canals ended up rewriting the pilot with Murphy and his creative partner, Brad Falchuk, per the same article. Currently, the Pose writers’ room also includes Our Lady J (who’s written for Transparent) and trans activist Janet Mock. And while Canals told the New Yorker that he was initially concerned that his Pose characters would be sensationalized or exploited, his fears were soon assuaged. “I knew that I was not going to be just a brown body in the room,” he said. And Murphy seems to understand the importance of a show like Pose, too — especially in this political climate. “It’s television as advocacy,” Murphy told Nussbaum. “I want to put my money where my mouth is.” 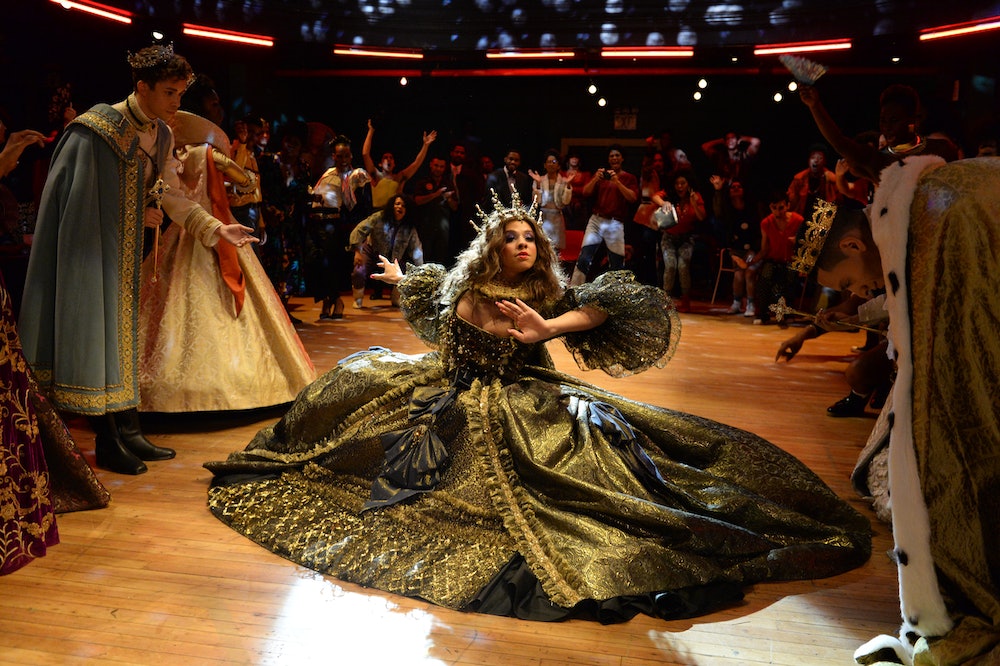 So while Angel may not be a real person, she was inspired by the 1980s LGBTQIA+ community in New York. “We’re standing on the shoulders of so many people who have already broken down so many barriers,” Moore told Entertainment Tonight of her role in Pose. Moore described Angel as “definitely unapologetic.” She continued, “She’s brave, she knows where she’s going, has a strong sense of self, and is staying true to the future she sees herself in.”

Indeed, Angel already knows who she is — she’s just waiting for everyone else to catch up. “What do you want out of life?” Evan Peters’ character, Stan, asks Angel in the trailer. “I want to be treated like any other woman,” she answers. “That’s my dream.”

On Twitter, Moore dedicated her performance to Naomi Hersi, who was found murdered earlier this year, according to Broadly.

My Role of Angel In POSE is Dedicated to Naomi Hersi.She is a Somali trans woman who loved the color yellow, tennis music and was described as a movie and tv addict
she was murdered in a london hotel room by a 24 y.o man and 17 y.o girl.

Peace be upon you, Naomi.

As for her past work, Moore played a character named Dijon in the film Saturday Church, which premiered at the Tribeca Film Festival. But as recently as March 2017, Moore was living in a group hostel in Queens, where, she explained to NBC News, “Your bed is free when you’re not here. If someone else is in need, your bed needs to be filled.” At the time, she was an unsigned model and had just appeared in her first music video.

However, according to the same Entertainment Tonight interview, Saturday Church was Moore’s first audition, which she heard about through her house father, Jose Xtravaganza. “I felt super confident,” she recalled of her audition. “I thought, ‘Nicki Minaj is going to knock on my door any moment now.’” And the actor wasn’t exactly wrong, because here she is today, starring in a Ryan Murphy show, playing another trans woman of color. “It’s really exciting to be one of the people this story is actually about,” she told ET about Pose.


FX Networks on YouTube
It’s clear that Moore has the utmost respect for Angel and is taking her Pose role very seriously. “When you see the life of Angel.i want you think of the countless black trans women who were purposelessly destroyed simply for daring to exist and live in their truth,” the actor tweeted on May 19.

This site uses Akismet to reduce spam. Learn how your comment data is processed.